Yikes, well, another month has gone by, and all I've managed to see/read is one movie. I'm glad I'm out living life, but am really looking forward to the break and maybe reading one of the zilions of books lying in stacks around my home.

Number two in the Twilight saga, this was my least favorite book. The movie was much better than the book. A very buff Jacob was very much worth the price of admission! :) I still think Kristen Stewart is the most wooden romantic ingenue ever, but I did enjoy the story. They stuck pretty much word for word to the book, and it was always action packed. The wolf CGI was pretty slick, and the cinematography of the west coast was beautiful. If you are a fan of the series, go see it! You'll get over the sparkly vampires, eventually... :)
Posted by Kat's Kuriosities at 10:21 p.m. No comments:

Today I played a gig with the Royal Regiment of Canada for HRH Prince Charles and his wife Camilla, Duchess of Cornwall. The Prince was presenting new colours to both the RRC and the Toronto Scottish Regiment. Colours are flags, but read a more detailed explanation here. It was a super big deal, because it hasn't happened since 1962, which was before the maple leaf was even Canada's flag. There was a closed reception after the ceremony, where I got to shake hands with the Duchess of Cornwall. I really liked that she was wearing both the UK poppy as well as the Canadian one.

The more interesting story was, I was just about to meet Prince Charles 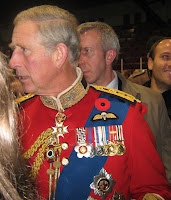 when his bodyguard was getting ants in his pants about the crowd. He asked the lot of us to move back then specifically said, to me, "ma'am can you please move back". I was being crushed between two people, so I said, politely, that I couldn't move back. He then returned (quite rudely, I might add) "well you're not trying very hard, shall I give you a push?" then proceeded to direct the Prince to the other side of the audience. Well, I guess, as JT says, it's a lot more interesting of a story than, I shook his hand. LOL!

The whole experience was pretty awesome (and I'm not much of a monarchist), even if I froze my tail off and couldn't stop shaking by the end of the ceremony and could barely march off on my two blocks of ice for feet! :)
Posted by Kat's Kuriosities at 9:22 p.m. No comments: